Line Up Your References Before Starting Your Job Search 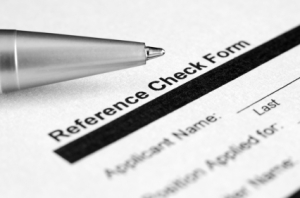 It’s the time of year again when many employees consider changing jobs.  Many hiring officials say your job references – and what they say – are as important as what you say about yourself.

Choose references carefully.  Once you identify them, you have little control over what they’ll be asked or what they’ll say.  Do your homework ahead of time.

Some employers may ask your references to identify others that know you.  Think several rounds ahead, like a chess player.  If a hiring official asks each of your listed references for one more name, who’ll be in that second round? Adjust your initial list as needed if after this analysis you don’t like where that would lead.

Even with your best efforts you may be unable to control who hiring officials contact. Last week it was revealed that LinkedIn, a popular networking site for jobseekers, has a tool called TrustedReferences that allows employers to secretly find current or former bosses and coworkers without your knowledge.  Hiring officials use this tool to build their own list of references, without telling candidates they’re doing so.  You might get a bad reference from a current boss and not even know it.  Article here: On LinkedIn, A Reference List You Didn’t Write.  Some LinkedIn users have sued, claiming that providing this information without permission violates a federal law governing the disclosure of certain personal information.  Actual lawsuit here: Class Action LinkedIn Lawsuit.

Here’s a screenshot from the LinkedIn site, referring to the feature. 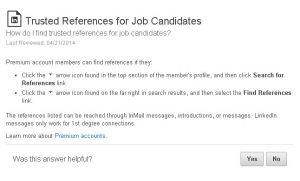