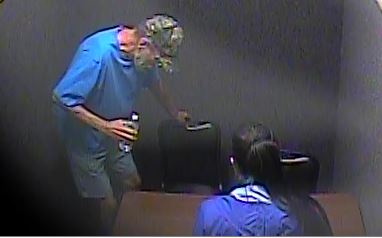 TALLAHASSEE FL. (Mar. 8, 2018).  A lawsuit I filed against a waste-management company alleges that it ordered my client, a black driver, to immediately return to a neighborhood where a customer had just shouted racist slurs at him and threatened to shoot him.  The driver, fearing for his life, refused to go back, and was swiftly fired.  The photo above was taken from a police video and shows the alleged assailant about to sit down for interrogation by the female detective shown here with her back to the camera. The man was charged with criminal assault after the questioning.

Employees have the right to refuse a task because of a reasonable fear of death or serious injury.  Here, the incident had just occurred and the suspect had not yet been apprehended.  At that point my client – a father of three young children – would have been risking his life if he’d returned to the small town where he’d just been threatened.

On the day of the assault the driver was working a route normally driven by others when he saw a minivan quickly pull up behind him.  The suspect got out and began shouting racial slurs at him, complaining about the company’s poor service.  My client explained that he was not the regular route driver but offered anyway to drive to the customer’s house and pick up whatever others had missed. The customer, undeterred, then threatened to beat the driver up and, as he continued, to shoot him.  My client, fearful that the confrontation was about to turn deadly, climbed back into the garbage truck and, after having trouble starting the truck, fled the area and headed back to his facility.  Incredibly, the customer began following him, although he broke off contact before my client reached the facility.

But once my client returned to the company, a supervisor told him to get back to the neighborhood or go home.  He refused because at that point the customer’s whereabouts were unknown and the threat of serious harm or death remained imminent.  The next day he was told he either needed to go back to that route or lose his job.   With the suspect still at large, he opted in favor of his own personal safety, and his employment came to an end.  The case is pending now and will he heard by a judge and jury in the next several months.

On occasion employers will make unreasonable requests of employees, whether it’s a situation like this, or a demand to work without safety gear in a toxic environment, or to lift or carry items that would likely cause serious physical injury.  I was contacted a few months back by an employee in Georgia whose boss demanded he manually move a 300-pound pallet of materials from the warehouse onto a 53-foot semi tractor-trailer backed up to the loading dock, a distance of about 100 feet.  The boss was trying to punish the employee by refusing to allow him to to use a hydraulic pallet jack.  The employee, who is older, refused to drag the pallet for fear he would severely injure his back or suffer a heart attack.  He, too, was fired, for insubordination.

A refusal to perform tasks like these must be based on a genuine legitimate fear of death or serious injury.  Courts have said chaos would result if an employee could refuse a task on a mere imagined or hypothetical risk.    If you have questions about your right to refuse a potentially-dangerous task, please feel free to call me at 1-800-663-7999. Consultations are always free, and always confidential.