Home › Damages › What Can You Win In A Discrimination Case?

What Can You Win In A Discrimination Case? 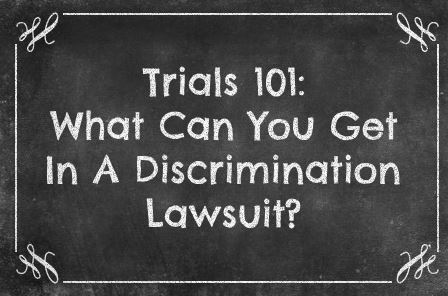 One of the best questions I get from clients is, “So, what is our goal?  What can I ask for, and what can I reasonably expect to get?  It’s an important topic.  You need to know your options, and it’s best to know them right from the beginning.

It’s difficult to predict the actual outcome in the beginning, of course.  There are many variables, and they aren’t always known until much further into the case.  For example, variables include (a) the actual witness testimony, (b) the documents, (c) the judge assigned to the case, based on the judge’s known history in ruling on prior similar matters, (d) the law firm chosen to represent the company, (e) your actual and predicted future losses and (f) the known or unknown motives the company may have to settle or to fight. There are many others as well.

But I can at least outline in general terms the kinds of relief you can ask for, depending on the claims you have, and the laws that govern them.  Common forms of compensation include awards for:

Other kinds of relief you might be eligible to receive that aren’t monetary can include:

It’s important to know what you’re eligible to ask for and, of course, to know what you can realistically expect to receive in your case.  Cases are like fingerprints; they’re all different.  So while we can provide rough outlines of possible outcomes, it isn’t until all the evidence has been gathered, and the claims in the case finalized, that I can provide a precise analysis.   This is why Internet searches for “similar” cases usually won’t lead to a reliable gauge.  Every case is different, and those differences matter.

I encourage discussions about possible outcomes.  It’s a great way to make sure your expectations are in line with an outcome that can be achieved.  The subject of possible outcomes should be an ongoing and active topic of conversation as well, since the strengths and weaknesses of a particular case can change sharply as new information is developed.

I’ve outlined the most common forms of relief above, but whether you are eligible for them in your case will depend on many factors.  The law(s) supporting your claim will play a major role, too.  For example, the kind of relief you can get from an employer in the private sector may be different from what you could get from a public-sector/government employer.  Wage and hour laws, age discrimination laws and laws governing employee leave for serious health conditions (such as the FMLA) each have different rules about what a winning employee can recover.

All these questions have answers.  Don’t be shy about asking for them.  Of course, I always recommend talking to a lawyer who only handles employment cases and who only represents employees.  Lawyers who also represent employers might have a conflict of interest.  Ask a lawyer how many employment cases, and how many actual trials, they’ve handled.  Experience matters.

Like Loading...
‹ Missing Work Due to Medical Emergency? Handle the Emergency First. Then Call Your Employer.
Top 10 Ways Employers Violate Your Rights – And What You Can Do About It ›